This time of year is my favorite time of year. Plants look good, if they’ve been watered, and the weather is warm. Nights are never hot, always cooling to at least 60 degrees if not cooler. When I go out into the garden the banana leaves all have drops of water along their edges. The cactus are blooming. Tomatoes are ready to eat off the plants. Only one thing makes me nervous. Heatwaves.

We are due to have record high temperatures for a few days starting tomorrow. I hope the forecast of 110 degrees is wrong. They usually are, right? Heat in that range spells real danger for my plants with large leaves, especially in the greenhouse. So, I figured I would take some photos of those magnificent leaves in case they turn crispy by the end of the week.

First is my new clump of blood bananas. I planted it (and all the rest of the bananas) at the end of May, as a single 1 gallon pup. The pot was labeled Musa ‘Raja Puri’ but I was told the actual name was Musa ‘Rojo’. It has grown, but these leaves aren’t the biggest in the greenhouse. They are incredible though. The intense blood red on the leaves is something you need to see to appreciate. This banana is one of my favorite cultivars and I’ve grown it several times as an annual. I’m excited and hopeful that I can turn it into a perennial now. 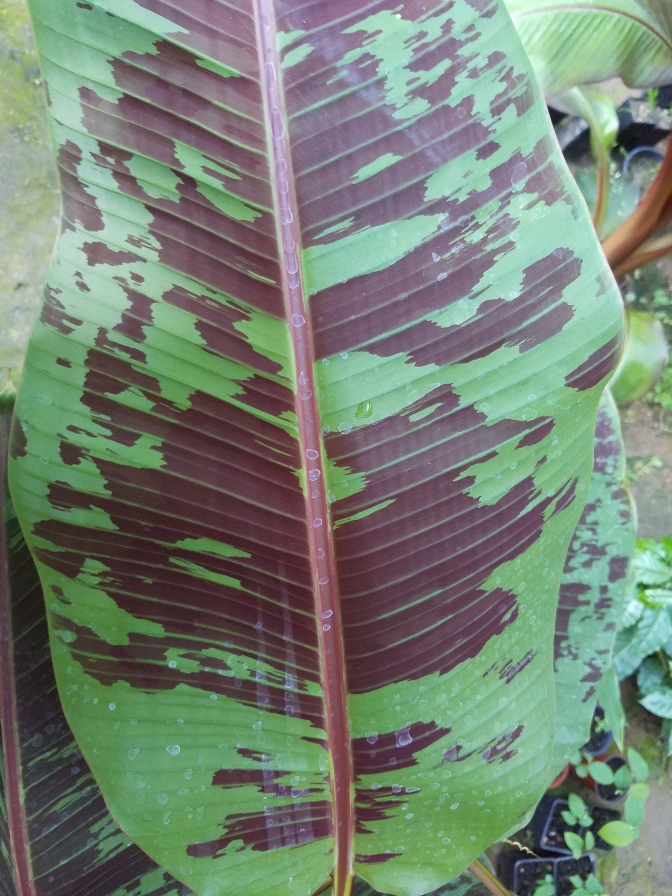 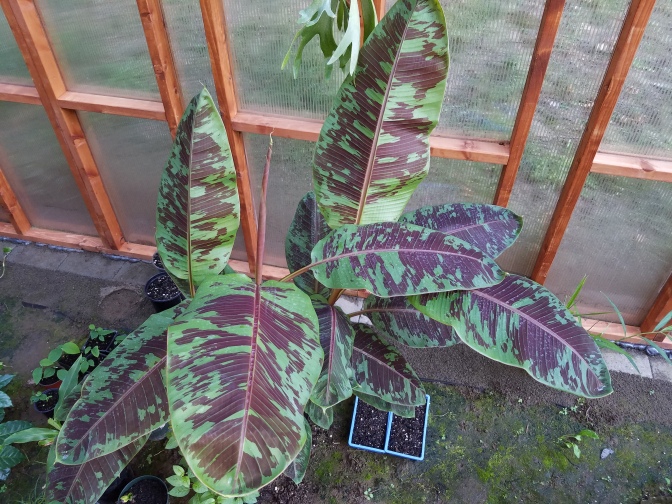 Next is Ensete ventricosum ‘Maurelii’. This African banana relative will eventually get too big for the greenhouse, however when that happens I can just chop it back to a short pseudostem and it will start over. It is a heavy feeder, and I have never fertilized it. It has been complaining about that for a while now by putting out less than stellar leaves. It is in the running for being the tallest plant in the greenhouse, but it isn’t the winner surprisingly.

The Musa ‘Dwarf Cavendish’ is living up to it’s name. While not small, it certainly hasn’t gained the height or leaf size that any of the other bananas have. As young plants, DC will show red coloration similar to M ‘Rojo’ but not as extreme. I do like how the undersides of DC’s leaves are shiny and powdery white. Don’t you just love banana plants?

The real star of the greenhouse is Musa ‘Dwarf Red’. It has pumped out leaf after leaf, significantly increasing in size each time. The midrib of each leaf is a strong burgundy, which really looks great against the powdery green on the rest of the leaf. I think DR has the biggest leaves in the greenhouse, even before I moved a giant clump of Colocasia esculenta out and into the yard. If it comes to it, I’ll get some tasty red bananas off of this clump next year. Even if I don’t, this dwarf will still be my favorite banana in the greenhouse. I use dwarf here as a relative term. It is still a very large plant. 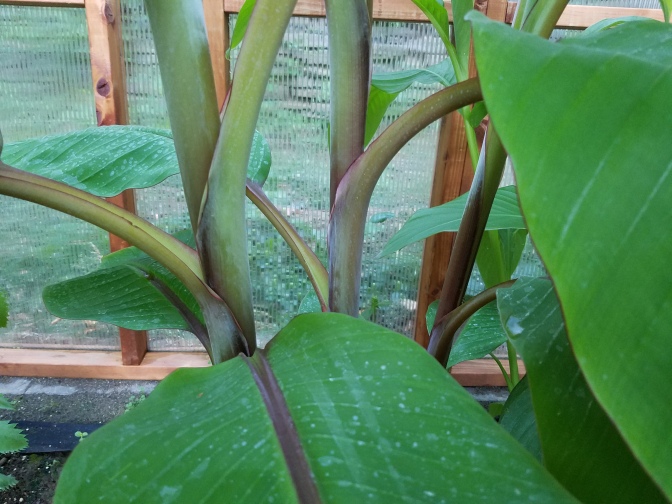 Philodendron selloum is a new addition to the greenhouse. The current leaves are nice and green, with some attractive leaf margins. I know that with time it will get even better.

While it’s leaves are wide, the next plant gets top marks for height. Abutilon ‘Red Tiger’ is by far the tallest plant in the greenhouse. It looks like I have a big fishing pole with leaves in the corner. When I planted it I wondered if it would eventually reach the ceiling. I didn’t think I would have to worry about that this year. I suppose I should prune it, but I kind of want to see it get that tall.

Colocasia ‘Pink China’ has been a good elephant ear for the greenhouse so far. It is plenty hardy outside, but I figured that inside the greenhouse it would be even more vigorous. It started as a 4-inch pot with a single leaf in May of this year. Now it’s a monster, spreading like crazy. It makes me happy!

The last plant is a truly small plant, but still great. It’s basically all leaves. Neoregelia ‘Fireball’ is a common bromeliad, and is probably only special to people like me. Up north, we don’t get many bromeliads! Just talking about them makes me miss my gigantic Vriesea imperialis. Maybe I should get another one…

One thought on “Leaves to look at”