I’ve had cactus as houseplants for less than 5 years, so I don’t claim to be an expert on the subject. As outdoor landscape plants, my expertise shrinks to even shorter time periods that I don’t care to share with the general public. The first cactus I planted in the ground melted a few weeks into winter, but I managed to save a piece (which still survives today). A lot has changed between me and the cacti. Especially the amount of drainage!

Anyway, the rain has finally decided to stop, and the cactus that I have are doing much better than they ever have. They are green, spiky, offsetting, and flowering. Amazing. 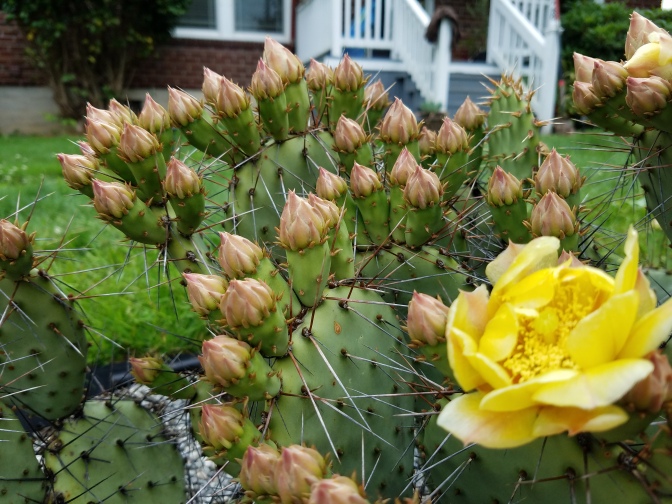 Opuntia cycloides. a common prickly pear across the southern US. Some people may consider it a weed, but I think it looks great.

Of course, Hank is still blooming as well. I don’t there has been more than a day when this Epiphyllum ‘Fantasie’ wasn’t blooming since the beginning of May. We’ve had lots of rain this spring, so it spent some time in the greenhouse. That seemed to kickstart it, and it hasn’t looked back since then.

Not a cactus, but still neat. My Cordyline collection is still in it’s infancy, but that’s how it has to start. The cordy on the right is the ever present C australis ‘Red Star’. The one on the left is a new one for me… C australis ‘Torbay Dazzler’. It was planted as a gallon sized plant in early May, smaller than the Red Star in this picture. I’ve been planting most things in the greenhouse with mostly amended soils. The solid clay that is in there right now is very heavy, and probably doesn’t do much for most plants. That, and I’m sure it is nutrient poor (given the state of the lawn surrounding the greenhouse). The amendment mix consists of peat moss, perlite, vermiculite, mycorrhizae, chicken manure compost, and a little bit of sand.