Sometimes, in the garden, you find that some plants just don’t do well in certain spots. Other times, a plant surprises you with how well it does compared to others in other places. I find that while my garden is small, it has several micro-climates that vary in exposure, heat, drainage, and other things. Instead of fighting tooth and nail to grow things in places that prove difficult, I like to just put things in particular spots. I’m sure that many, if not most, serious gardeners practice this technique. It just so happens that this idea is part of a project that I am working on.

The southwest corner of my yard is very exposed, and in the summer it turns into a parched landscape that is difficult at best to keep looking good. Three large spruce trees ensure that the ground remains bone dry almost year-round. It is also south facing, and gets a full blast of sunshine from dawn until dusk. Whenever I talk about that particular area, I fondly and very appropriately refer to it as the desert southwest.

We began the project over the recent holiday weekend. What better way to prevent fires from stray fireworks than to remove all of the combistible material? Grass, weeds, and all kinds of debris were removed. Apparently, even though it gets little water, lots of weeds can still grow. A moisture barrier layer was laid in the empty spaces where nothing will be growing. I’m hoping that nothing will take root in the gravel mulch we laid on top! 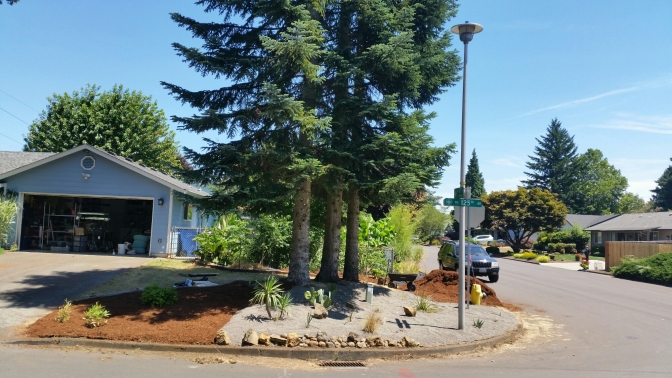 None of the cactus, or any of the other landscape plants, are newly planted. The winter moisture that we get is manageable by these drought tolerant individuals, and in fact the drainage has improved now that this project is done (almost). Now that I look at it, I think we need a few more plants in there! 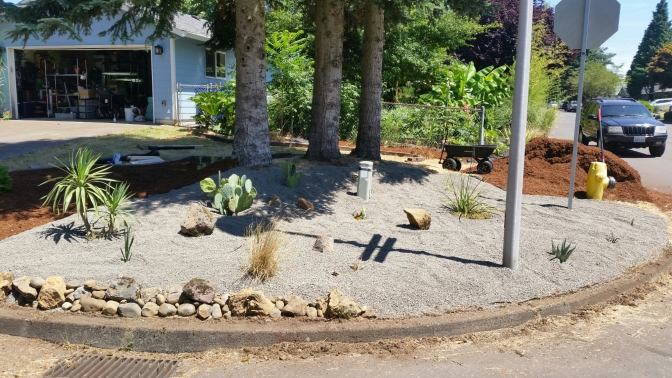 This corner is a part of a larger project, as evident by the pile of mulch and things laying around. The temperature was around 95 degrees, so things were moving slowly (including cleanup). The biggest speedbump in this area is that ugly utility box right in the middle of the gravel. We haven’t been able to figure out what utility it services, and so have been hesitant to do anything to it. The rock wall will extend most of the way around the corner, as well.

We were very careful around this little pup from an Agave americana. The pups are all new this year, and the mother plant has been in its current spot for two years.

These spikey agaves should keep those dang kids off of my lawn! They will look good doing it, too. I have half a dozen more waiting in pots, and they will probably join these in the ground soon.

The only problem with the Yucca baccata is that I started out with a tiny one. It started out last summer with only 3 leaves, all of which are now gone. Maybe I’ll just put a bigger one next to it.

Romneya coulteri, the Fried Egg Poppy, has twiddled it’s thumbs for the past year. I expected it to get a nice boost this year with spring rains, but unfortunately that never really happened. I can’t really complain, though. I haven’t watered it since the day I planted it!

Here is that little Agave vilmoriniana that survived the winter outside the greenhouse. It looks better with a nice layer of rock mulch. Who knows if it will ever really look good, though with this heat wave it might just grow enough this summer to look acceptable.

This little Opuntia ellisiana was injured last fall, and luckily it came through. The sempervivums are showing a little heat stress, unfortunately.

Another opuntia, spineless of course. I don’t know why I bother with that though, when the agaves nearby are covered with wicked spines.

I don’t know the exact name of this yucca, but it is one of the million yuccas that cover the front yards of Portlanders.

I better go finish moving the mulch, before I get lazy!

One thought on “Why fight the garden?”