Summer in the garden of big leaves means one thing… big leaves! That, and lots of flowers. Two things, I guess.

Anyway, now that the seasons have changed yet again, the garden enters a new phase. The plants are filling in and growing high, thanks in no small part to an unusually warm spring. Here are some plant happenings that I’ll share.

The Musa ‘Double Mahoi’ has shot out 5 pups in the last few weeks. Hopefully the banana fuel that I’ve been feeding it does the trick, and I get lots of bananas. 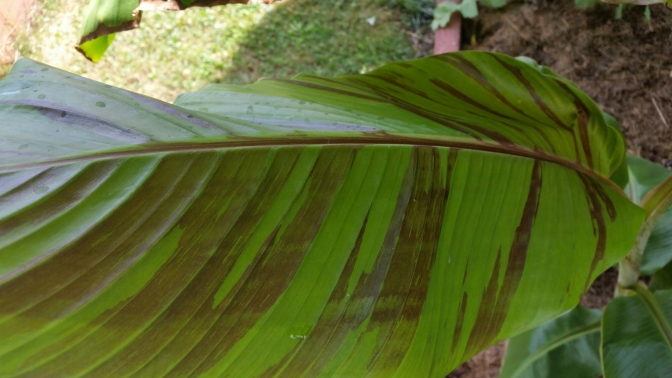 Musa ‘Red Tiger’ has come back for me twice now, once through temperatures in the single digits for a few hours. It isn’t quite as vigorous as the standard Musa basjoo, but it looks nicer. Once again, I’m banking on the banana fuel to push them to their maximum growth potential this year. Six to eight feet high? I think it’s possible.

Eucomis ‘Sparkling Burgundy’ is sending out it’s pineapple-esque flower. Having planted it next to ‘Sparkling Beauty’, I am glad that I kept the label with each plant. 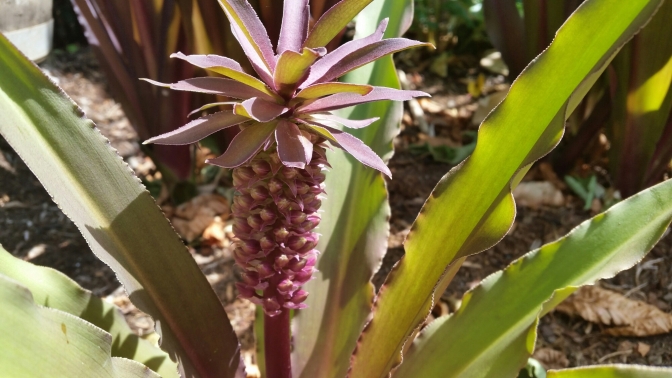 Eucomis ‘Victoria’ is more green than the other pineapple lilies. 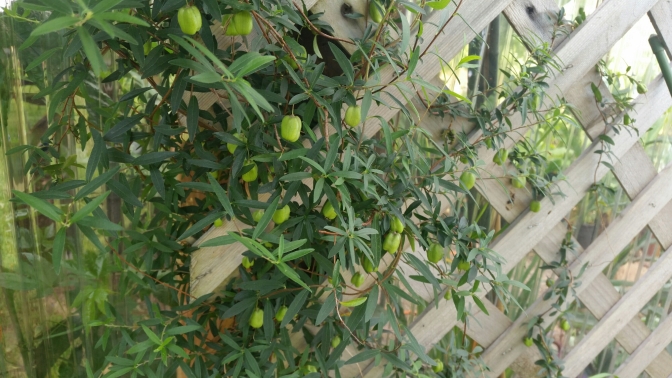 Billardiera longiflora is covered in ripening fruit! Maybe I’ll try them out before they become overripe this year. 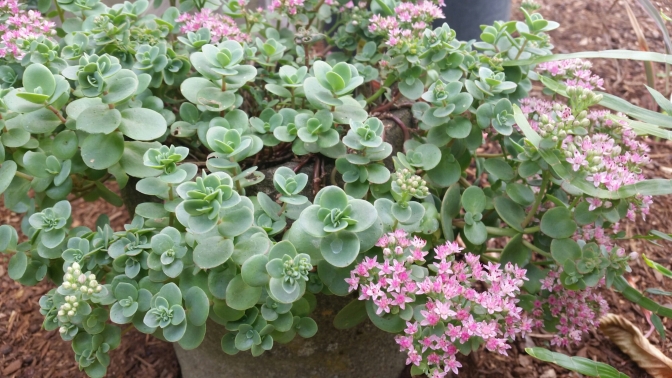 Stonecrop ‘Lime Zinger’ is a dependable succulent, as long as I can keep the slugs off of it in February and March. I managed to this year, and it is rewarding me with nice color.

Homalocladium platycladum just gets weirder and weirder the more it grows. I love it! It looks like a mass of green tapeworms!

The Kentucky lily has rebounded nicely after an attack by an unwanted rabbit this spring. There are at least a dozen more blooms ready to pop. 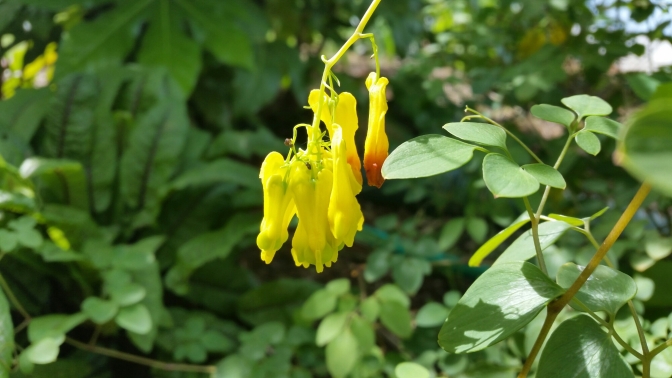 Dicentra scandens is an unusual take on a common look. Everyone here in Vancouver has bleeding hearts in their landscape, but I have never seen anyone with a bleeding heart as a vine. This is surprising to me, as it is nearly a weed with it’s vigorous climbing habit, large size, and hardiness.

Aechmea fasciata ‘Primera’ is a bromeliad that you can easily find at most grocery stores in April, but I still like it. With large leaves and a neon pink and purple inflorescence, it is easy to see when I put in in the branches of my cherry tree.

The calla bulb mix that I planted has bloomed for the first time at 3 years old. I know now that there is at least a white one in there!

Alstroemeria ‘Glory of the Andes’ is in full swing. My wife calls this one the “prom flower”.

Solanum pyracanthum is viciously awesome. Each spine is hard and sharp, even when small. The colors are amazing too. I think the bright orange spines look killer against the mint green leaves. This is one tomato I won’t be eating.

Scabiosa ‘Ace of Spades’ is a neat one too. I can see why it is called the pincushion flower.

Hesperaloe parviflora is blooming again. I gave away all of my seeds from last year, so I plan on keeping most of the seeds this year. I like this false yucca quite a bit. I could use a few more, as well. 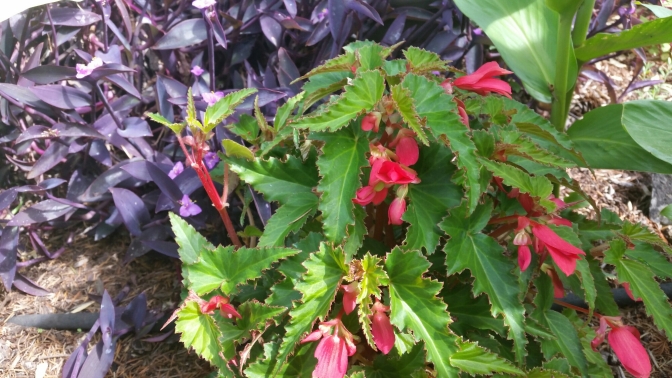 In the background, you can see Tradescantia pallida ‘Purple Heart’ with it’s tiny pink flowers. The real focus of this photo is the Begonia boliviensis ‘Santa Cruz Sunset’. I originally had a hanging basket with this begonia, and after losing the hanging pot over the winter I had volunteers appear in my garden. They have all been extremely hardy, going on 3 years now. 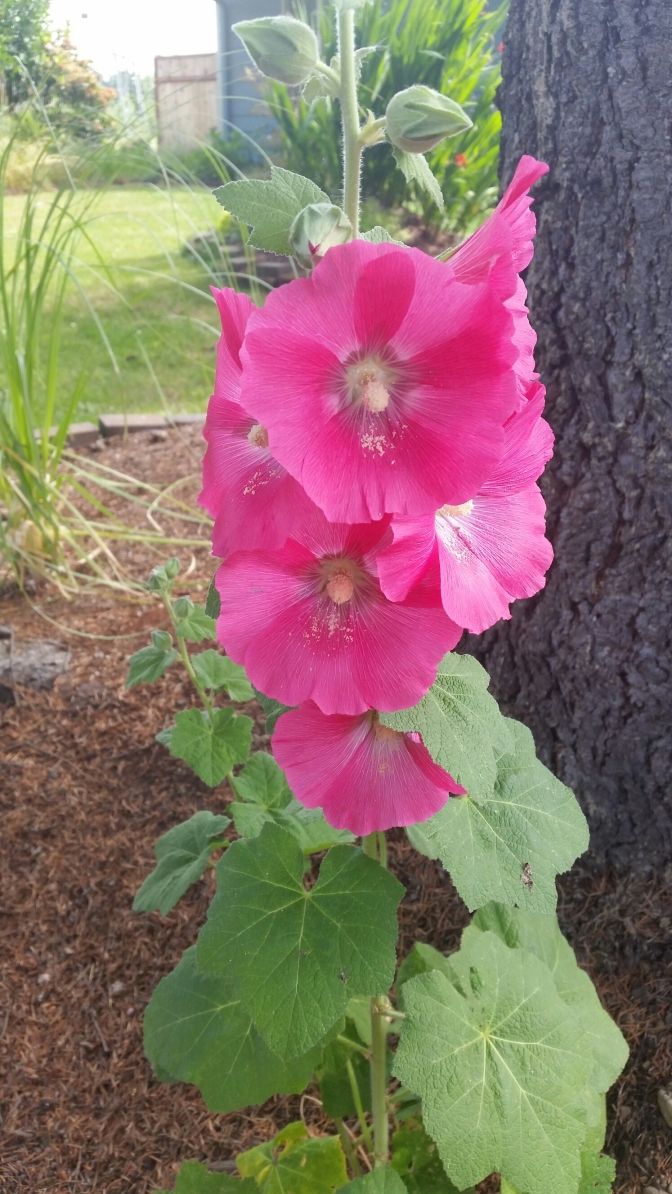 The same thing goes for this Hollyhock ‘Mars Magic’. Sold as an annual, it has been amazingly drought tolerant. It blooms every year, and keeps coming back without a hiccup. Something this tough deserves a place in my garden. 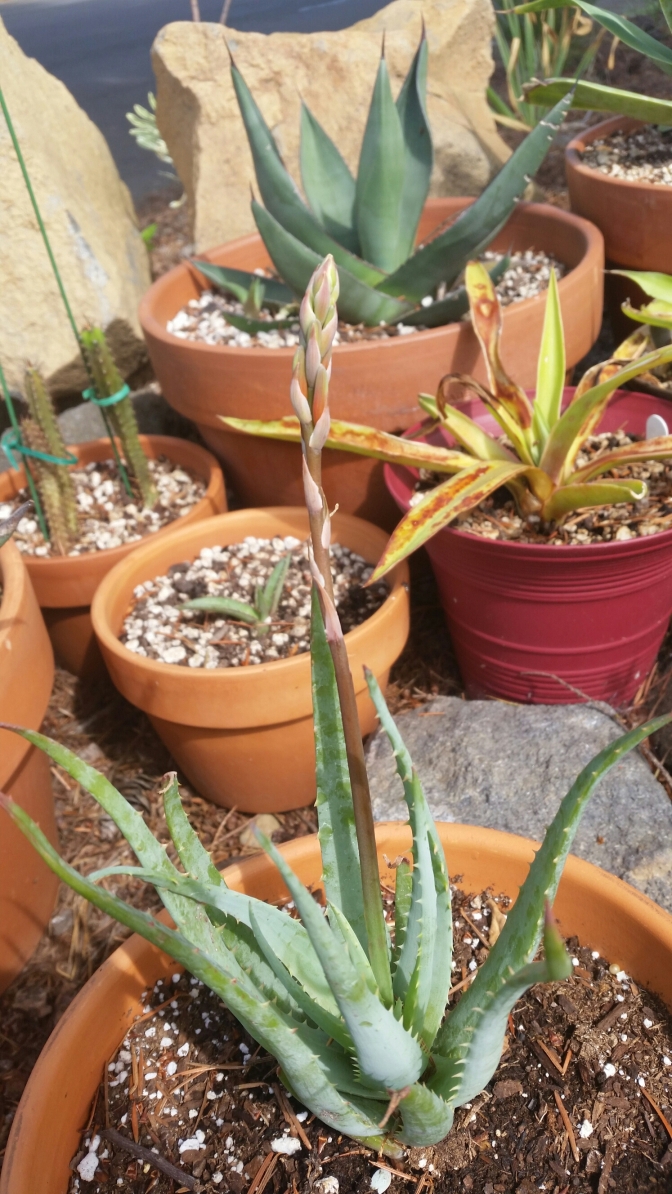 Nearly as drought tolerant as the Mars Magic is this little aloe. I am guessing that is something similar to ‘Blue Elf’ but I suppose I’ll never know for sure. It is neat, regardless.

So is Monarda didyma ‘Jacob Cline’. 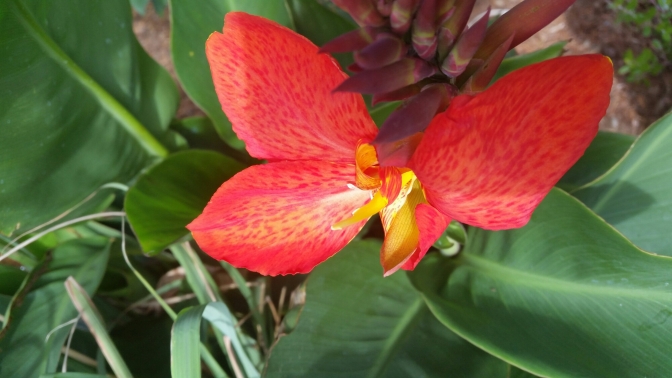 This Canna ‘South Pacific Scarlet’ is the first canna bloom of the year for me. Its a great way to kick off the season! 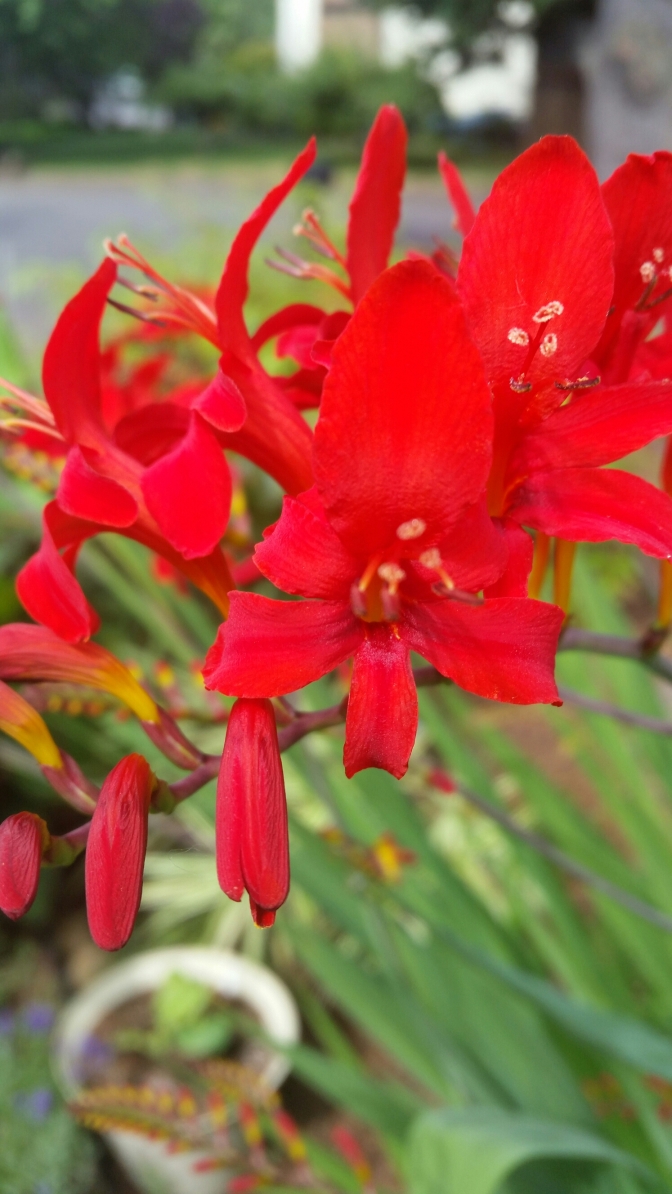 Another hummingbird magnet. This one is Crocosmia ‘Lucifer’. Sitting at eye level right outside the big picture window, we’ve been watching a few hummingbirds drink nectar for a week or so. 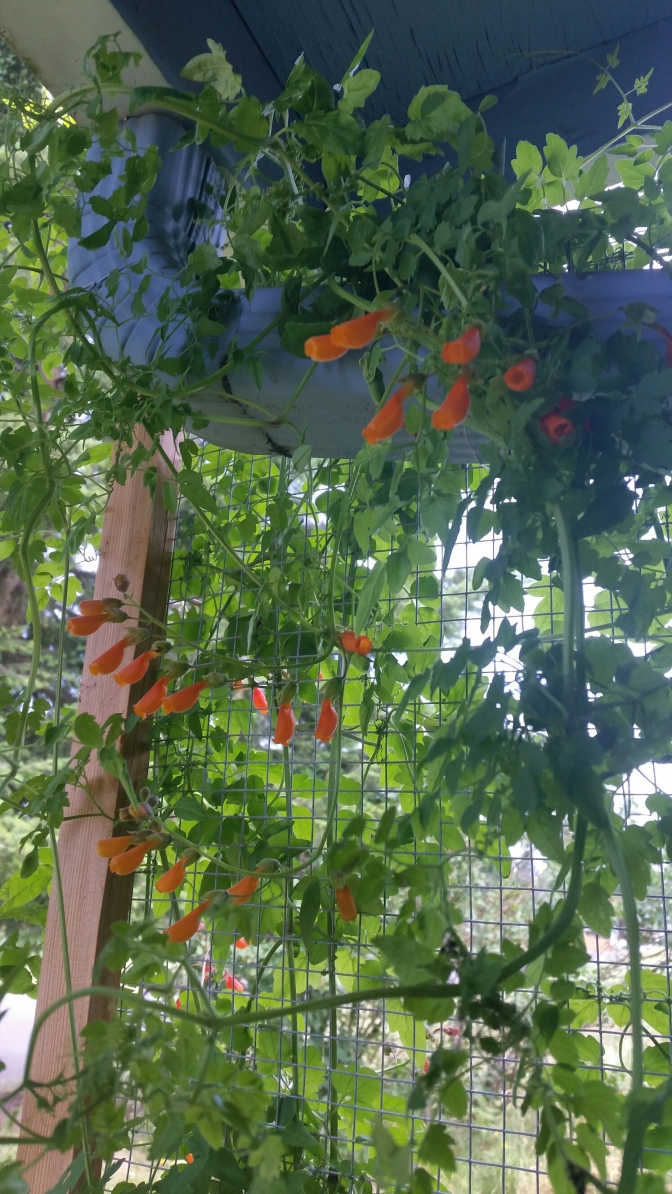 Eccremocarpus scaber has been blooming since early in the spring, and now there are seed pods all over the vine. 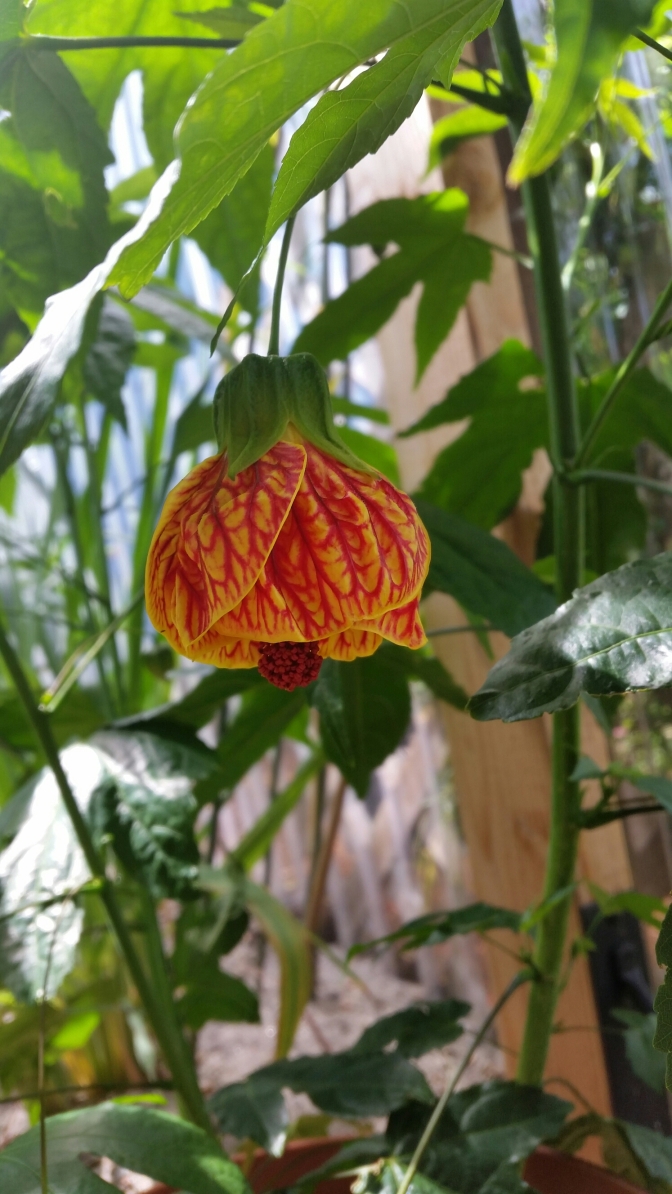 Abutilon ‘Tiger Eye’ is marginally hardy at best in my garden. This flower is on a potted specimen. The sole survivor of last winter is spindly and having a tough time catching up with this one.

On the opposite end of the tropical-ish spectrum is this Passiflora ‘Clear Skies’. So hardy that it is nearly evergreen, it blooms like crazy and covers everything near it with deeply lobed leaves.

I have a few new fuchsias this year. This one is called Marinka, and unfortunately isn’t hardy. I try to stay away from flowers that aren’t hardy, but at just a dollar I couldn’t pass it up. 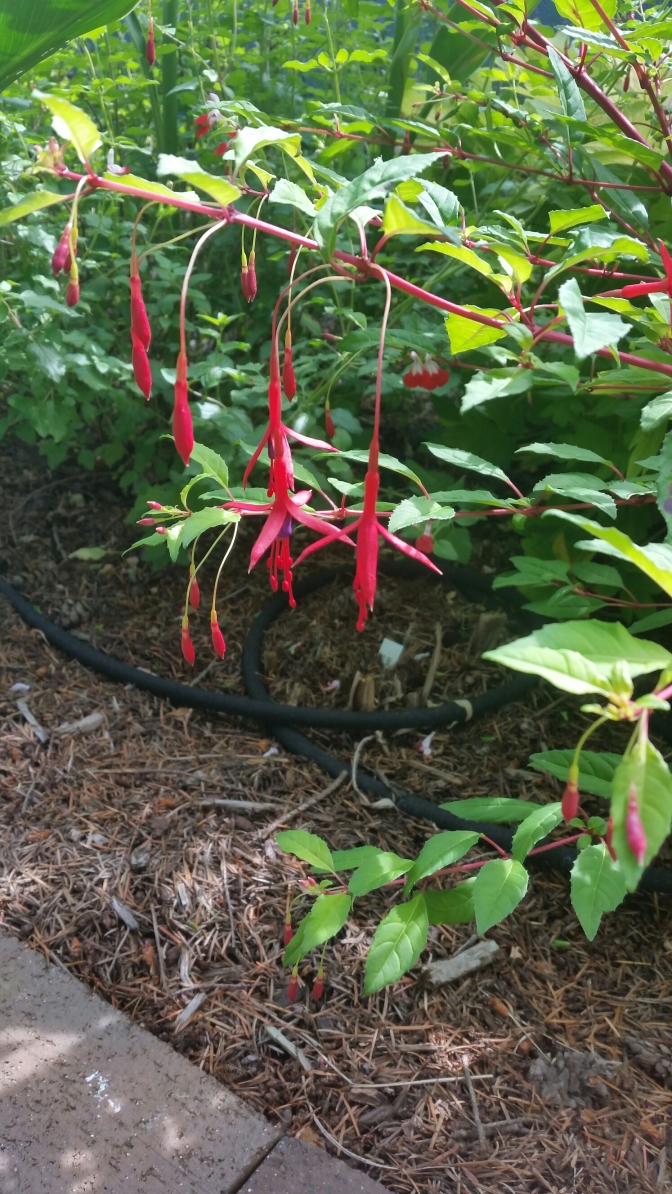 This fuchsia is a hardy variety sold under the name ‘David Palmer’. It is extremely vigorous and would probably become a small tree if I left it alone.

Swanley Gem is another hardy fuschia. Much smaller than ‘David Palmer’ overall, the flowers are monstrous comparatively.

While I am not a huge fan of ‘Miss California’, it was also just a dollar. I needed something to fill in the pot underneath a brugmansia, and I thought it wouldn’t hurt. I may not replace it if it doesn’t survive the winter. Maybe one of the ‘Swanley Gems’ will take its place… only time will tell.